For many years, Cory has participated in a service of remembrance at St Olave’s Church in London. The Cory Company Memorial, which will not take place this year due to the Covid-19 lockdown, is hosted by the Corynthians to remember those who gave their lives in the First and Second World Wars.

This annual event is deeply rooted in Cory’s history. Cory was incorporated in 1896 and by 1914 was a substantial company operating its own ships, trains and barges (lighters) bringing coal into London via the Thames. The returning empty barges were used to remove vast quantities of waste produced by London.

With the outbreak of WW1, things changed considerably for Cory. The company’s coal distribution activities were of national importance to the war effort and most of its tugs were transferred to the Royal Navy.

Cory had a large workforce, many of them skilled as engineers, mechanics, bargees and physically fit labourers. Before conscription was introduced, Cory encouraged its workers to enlist in Kitchener’s Army – an all-volunteer force of the British Army – and guaranteed to keep their jobs open for them. The company also undertook to look after the family of anyone who joined up, setting aside a sum of £25,000 (equivalent to £3 million today) to care for the men and their dependents.

Within a few days of the appeal there were enough men to form the entire D Company of the 6th Battalion of the Buffs – also known as Cory’s Unit. Most of these men came from places like Greenwich, Erith and Plumstead.

Cory’s Unit was the nearest thing that Kent had to a Pals battalion. Pals battalions were specially constituted battalions of the British Army comprising men who had enlisted together in local recruiting drives, with the promise that they would be able to serve alongside their friends, neighbours and colleagues. The strength of such groupings was believed to be that men who knew each other and had shared backgrounds and skills would work and fight together more effectively.

Tragically, many of the men were killed shortly after leaving for the war. The first of those included Commanding Officer Captain Friend and 20-year-old Lieutenant Grieg, the son of Cory’s Managing Director, C. Hamilton Greig. The 13th of October 1915 was a particularly dark day for Cory’s Unit, with around a quarter of its men killed on the coalfields of France near the town of Loos. Few bodies were ever recovered. Those men who died with no known grave are now remembered on a memorial at Dud Corner in Loos (image right). 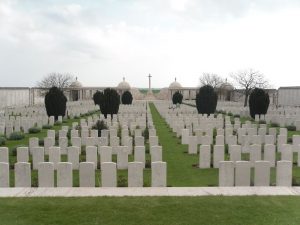 Of the men who survived, some continued to fight within the battalion, and some transferred to other battalions. A few, particularly those with specific skills, joined other arms, including the Inland Water Transport section of the Royal Engineers, transporting materials and the wounded.

We are fortunate to have a photograph of Cory’s Unit (image below), which was taken at Aldershot shortly before their departure for France on the 1st of June 1915. Within six months, so many of these young men would be a name on a memorial or buried in a battlefield grave in Belgium or France.

This year, and every year, we will remember them.

Thank you to Reverend Keith Fazzani, former Chaplain of the Queen’s Own Buffs Regimental Association, for researching and providing the information for this article.

Cory’s Unit was the nearest thing that Kent had to a Pals battalion. Pals battalions were specially constituted battalions of the British Army comprising men who had enlisted together in local recruiting drives, with the promise that they would be able to serve alongside their friends, neighbours and colleagues.