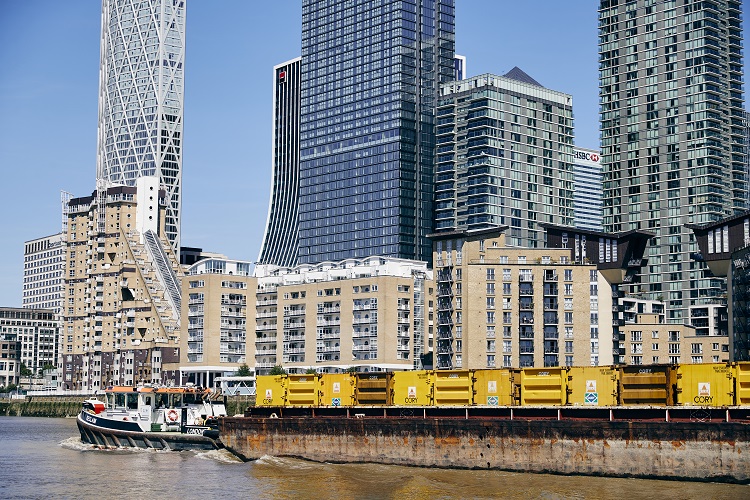 A Cory Riverside Energy employee with 44 years’ service at the company has today launched a new barge named after his daughter – on her 21st birthday. John Daly, whose father, grandfather and father-in-law also worked for Cory, launched Gemma D with Gemma at the company’s Riverside site in Charlton.

John and Gemma, who live in Belvedere, were joined by a small group at a socially distanced launch ceremony. Gemma sealed the launch in traditional style by smashing a bottle of champagne on the bow.

The new barge can carry 20 waste containers containing c.270 tonnes of non-recyclable waste – thereby removing the equivalent of 11 articulated lorry journeys from the roads, making London’s streets safer and cleaner. The new 20 box barges will ultimately replace the fleet currently operating from Smugglers Way in Wandsworth, Cringle Dock in Battersea, and Walbrook Wharf in the City of London.

In total, Cory operates a fleet of five tugs, more than 50 barges and in excess of 1,500 containers. This fleet is used to transport non-recyclable waste from waste transfer stations along the River Thames to Cory’s energy from waste facility in Belvedere. These same barges and tugs also transport the ash resulting from the energy recovery process further down the Thames to Tilbury where it is processed into aggregate for the construction industry. This use of the river removes around 100,000 vehicle journeys from London’s roads each year.

I was delighted to be given the distinction of naming the first of the new fleet of barges. It was a simple decision to name it after my daughter.

It has made Gemma’s grandfather particularly happy to know that the barge will carry his granddaughter’s name, as he is proud of his lighterage heritage having worked for Cory and other lighterage companies during his career. Today marked a special moment for the family.

John has had a long and successful career at Cory, so in deciding who should be given the naming rights, he was the obvious choice.

As well as naming the barge, John was involved in its procurement by providing recommendations at the design stage – so today is the culmination of another project for him!

We are delighted that Gemma D will have added significance as part of our new fleet of barges. As Cory approaches its 125th anniversary next year, these longstanding relationships are part of what makes the company what it is today.