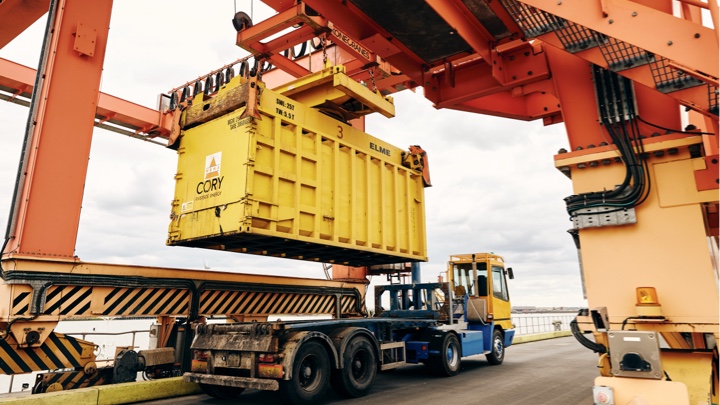 Cory Riverside Energy has taken delivery of its first new barge from Belgian shipyard Meuse and Sombre, following the signing of a £7million contract in May last year.

The barge is the first of 14 to be delivered from the shipyard, with a further two currently under construction in Belgium and due to be delivered in February next year. By March 2021, Cory will have taken delivery of six new barges which form part of the ongoing modernisation of Cory’s fleet.

The new barge is able to carry 20 waste containers containing a total of 270 tonnes of non-recyclable waste – thereby removing the equivalent of 11 articulated lorry journeys from the roads, making London’s streets safer and cleaner. The new 20 box barges will ultimately replace the fleet currently operating from Cringle Dock in Battersea and Walbrook Wharf in the City of London.

Naming rights for the first two barges have been given to Cory employees with over 40 years’ service with the company. The new barge will be officially named at a ceremony later in the year.

In total, Cory operates a fleet of five tugs, more than 50 barges and in excess of 1,500 containers. This fleet is used to transport non-recyclable waste from waste transfer stations along the River Thames to Cory’s energy from waste facility in Belvedere. These same barges and tugs also transport the ash resulting from the energy recovery process further down the Thames to Tilbury where it is processed into aggregate for the construction industry. This use of the river removes around 100,000 vehicle journeys from London’s roads each year.

The delivery of the barges represents the latest stage of Cory’s investment in its river-based infrastructure. It follows a deal announced with Newcastle-based A&P Tyne this July for the delivery of a further 21 barges, as well as the completion of a rebuild of two WWII slipways at Denton Wharf in Gravesend.

River operations have been at the heart of Cory’s business for over 100 years, and this latest investment will help us to secure our future on the Thames for many years to come. We’re delighted with this addition to our fleet and look forward to taking delivery of the additional barges over the coming months.

River operations have been at the heart of Cory’s business for over 100 years, and this latest investment will help us to secure our future on the Thames for many years to come